You’re Right...
All Religions ARE BAD
(And Here’s Why)

“And I profited in The Jews’ religion
Above many my equals in mine own nation,
Being more exceedingly zealous
Of the traditions of my fathers.”
— The Apostle Paul — 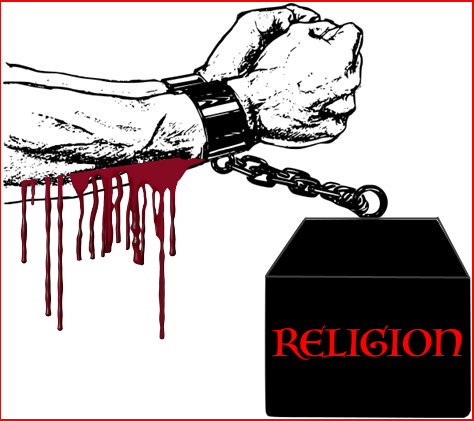 All words at their root have deep and profound meaning, and over time they may change their original connotation and be perceived a different way. Religion is one of those words.

In modern use it means the practice of any belief system, denomination or spiritual application — and in one sense that is true. However the actual meaning of the word is much more restraining and ominous.

The Latin origin of “RELIGION” is 'RE' which means “AGAIN” and 'LIGUARE' meaning to “To Tie Or Bind.” Put it all together and the real effect of all religions is to put people in a position to continually go back to those things that BIND THEM BACK To A Never-Ending Walk Of Works, Worship and Warnings.

Christianity on the other hand in the modern usage of the word could be classified as a 'religion,' but in the true meaning of the word it is the exact OPPOSITE of a system that ties you to rules, regulations, regalia, and restraints.

True Christianity is not another RE-LIGUARE which binds you to doing THIS, not eating THAT, wearing certain DRESS, self-PUNISHMENT, presenting SACRIFICES, requiring strict schedules of SERVICE OR ATTENDANCE, or PRAYING PRAYERS at certain times. Instead the true essence of being a Christian is being in a RELATIONSHIP — not only to God that made you, but to the only true God who is KING OF KING AND LORD OF LORDS. (Revelation 19:16)

Christ alone is the only one that can and will redeem you from sin and eternal death, and freely give all that choose to believe that He conquered death by raising from the dead. In doing so he alone opened the way for all to follow HIM as truly the only “Way, Truth and Life“ (John 10:10b) to heaven and eternal life. All that He requires of you is to believe in your heart in the Lord Jesus, and confess with your mouth that Christ is the only true God and repent of your sins, then you will be saved (Romans 10:9)

Friend, all Religions require YOU to pay a cost by binding you to doing something to redeem your life or achieve a state of perfection. Your sweat and blood is not required because Christ has already PAID THE PRICE of redemption WITH HIS BLOOD to make YOU Perfect in His holiness and wholeness that 'religion' can only partially promise and vainly hope to deliver IF you do certain things.

Saul who became the great Apostle Paul saw that religion is a FALSE PROFIT that cannot save. Like Paul instead put your trust in the TRUE PROPHET of Christ alone today as He is THE ONE TRUE AND ONLY WAY.