You’ve Been
BLINDED!
So Take Off
Your Blindfold

“The god of this world hath
BLINDED the minds of them which believe not,
Lest the light of the glorious gospel of Christ,
Who is the image of God, should shine unto them.”
2 Corinthians 4:4 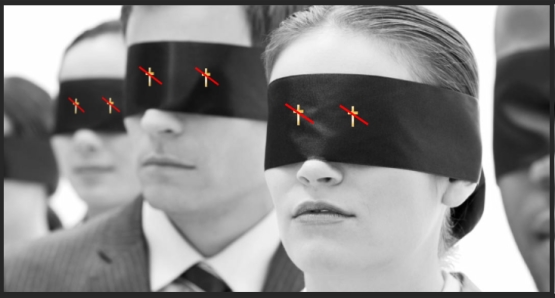 For many people, religion in general — (and Christianity in particular) — seems to be a very stupid idea. A popular sarcasm about it is that this 'faith' about drinking the blood and eating the flesh of a dead so-called 'savior' is about on par also with the lunacy and hatred these 'christians' espouse to those that do not agree with them while living lives that are totally hypocritical to the standards they so arrogantly preach. If that’s how you feel about Christians, then not only are you alone and on the same page as millions of others in the world, but with all due respect, you are also perfectly in line with the people in today’s picture — and here’s why.

First, if this is your view on what Christianity is all about, you’ve been influenced by TWO THINGS.

First are (indeed) a bunch of hypocritical church going do-gooders that you most likely have run into over time that like the idea of being 'holier-than-thou' but have no idea what being a true disciple of Christ really means and instead live by a legalistic list of rules that define what they consider 'godliness' — and I DON’ FAULT YOU ONE IOTA FOR YOUR TAKE ON THEM! However as today’s scripture points out it is not the hypocrisy of so called christians but a powerful agent that has been placed on your ability to see the true nature of God, His Word (The Bible) and His Plan for YOUR Life.

This blindness for those that do not see (maybe even you!?!) God’s attempt to speak to people a message of hope and good news about what can be yours in eternity, and that is escape from eternal DEATH and an offer of eternal LIFE. God desires to give the gift of eternal life, but Satan (aka as Lucifer, the Devil, and 'That Old Serpent') is trying to hide that from you...thus the blindfolds that are crossing out the cross. In fact Jesus says about Satan that his whole mission is to STEAL, KILL and DESTROY (John 10:10) and as long as you have that blindfold on, he will succeed at his mission and he will STEAL your gift, KILL your chance for eternal life and let you be DESTROYed eternally.

Only you can take off your blindfold — all I can do is tell you about it, but it is something YOU have to decide to do.

Will you decide to take off that blindfold today and see what God is offering??