“For he hath made him (Jesus)
to be sin for us, who knew no sin;
that we might be made the
RIGHTEOUSNESS OF GOD in Him.”
2 Corinthians 5:21

Are you a SINNER or a SAINT? 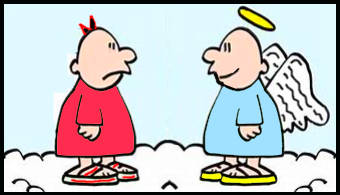 Well most people that are not a Christian would usually say that they are a “good person” so maybe not a 'sinner' (per se) but hope they are more on the saintly than sinner side. However most people that ARE Christians often say “Oh, I’m just an old sinner saved by grace!” Actually, both of them are wrong!

As today’s verse says, Jesus became sin and took all sin off of those that confess Him as their LORD and Saviour. At that point those that do take on His Righteousness and are always referred to in the Bible as “saints” and from then on are NEVER called sinners! So if you are a Christian, then you are now the righteousness of God and you are no longer classified as a 'sinner!'

Friend, if that describes you, you still can be a saint! All you need do is Acknowledge, Accept, Admit and Act to ask Christ to forgive you of your sins and you can take on His Righteousness! If this is you, take that step right now and trade in your righteousness for HIS RIGHTEOUSNESS!