Giving Up
Royalty For Humility

“But made himself of no reputation, and
Took upon him the form of a servant, and was
Was made in the likeness of men.”
Romans 8:14 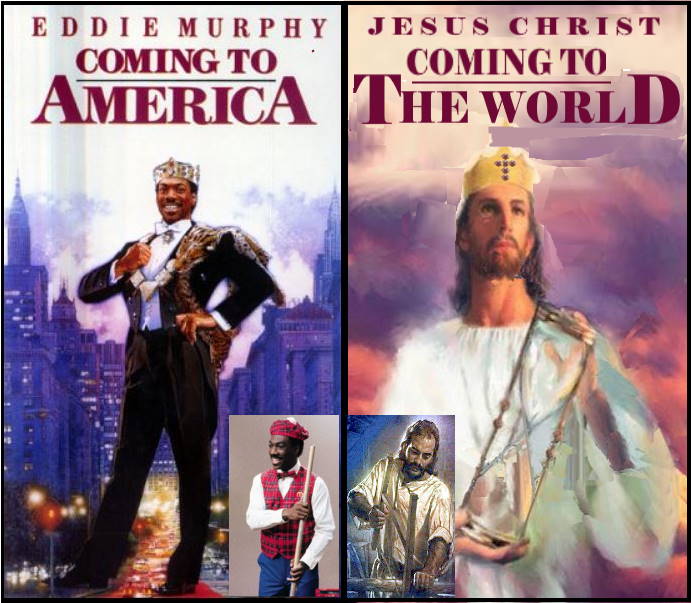 In the 1998 movie comedy Coming To America, Eddie Murphy portrayed a great African prince that left his position in the kingdom to humble himself and put aside his royalty and go to a poor neighborhood in New York City working as a fast food worker. His plan was to become a commoner so that people could see him for who he was, and seek a wife that would accept and love him.

Jesus Christ likewise came to earth giving up his royal throne and became human to live among people in a difficult world. He likewise wanted people to see his true character, deeds and values for who he was, and in a interesting parallel to the movie he also came to seek His Bride, which would become the church.

There is great disagreement to whether Jesus was ALL MAN and temporarily gave up His Divinity or BOTH GOD & MAN while on earth. Our goal at NotesOnLife is never to stir-up controversy so please take the following interpretation with an open mind, because if the lesson presented here is accurate, then it has vast implications for all of us believers in Christ.

If you think about it, Christ had to be as human as you and I – here’s why!

He hungered, was thirsty, became tired, and slept. Certainly working for years as a carpenter he had to earn a living as we do making money to support himself, and like any business or craftsperson then or now sought out customers, negotiated deals, gave quotes and had to finish jobs on time. In doing his work he sweated, worked hard, and most likely cut himself and bled – just like us.

This shows that he was indeed fully human, but something extremely important happened at the beginning of his ministry when he was baptized. At that moment while still fully human, He THEN received the full power of the Holy Spirit moving through Him! It was only after that point that He could speak and act in total faith that whatever he said would happen. By His Word a fig tree withered, the blind got their sight, lepers were healed and Lazarus was raised from the dead!!! But here is the reason why – not because he was GOD (that is, at this moment while on the earth) but because He was 100% full of the entire power of the Holy Spirit and applied it IN FAITH! Likewise when you receive Christ, the Holy Spirit also comes into you as well. Jesus taught us how to exercise the authority of the Spirit in the following two verses when he said:

“For verily I say unto you,
That whosoever shall say unto this mountain,
Be thou removed, and be thou cast into the sea;
shall not doubt in his heart, but shall believe
that those things which he saith shall come to pass;
he shall have whatsoever he saith.“
Mark 11:23

“Very truly I tell you,
whoever believes in me will do the works I have been doing, and
they will do even greater things than these.
John 14:12

Jesus was and is our example of exercising the fullness of the Spirit in this life as human! Like Him on earth, we must likewise humble ourselves, make ourselves of no reputation, but walk, act, speak and believe IN LIKE MANNERED FAITH to allow the full power of the Holy Spirit to work through us. So Christian, do not doubt, act in faith, and fullfill the promise of John 14:12! Like Jesus walking as a man upon the earth like us, so it is God moving through us in the power of the indwelling Holy Spirit that gives us the authority and power to “do even greater things than these!”