There Is
no god 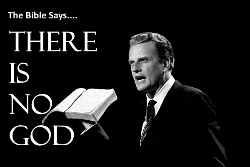 Most would agree that if there was a ‘god’ it would be something or someone bigger than ourselves - a supernatural being above this earthly existence that is some sort of spirit and most likely eternal in nature. Those that don’t believe in god often point out that there is no measurable evidence of a divinity in the universe, but let’s take another look at this from a macro and micro level.

Astrophysicists have carefully measured our universe and other galaxies, and at the macro level with just the simplest understanding of cosmology, we know that the Law of Gravity is universally at work. We even personally experience this law working while walking or watering. At the micro level, all living beings have an encryption called DNA that is so complex and extensive that if it were a computer program it would constitute literally trillions of lines of structured, logical code that defines each creature uniquely and specifically. In both cases “laws” are applied, so as human laws have an author, universal scientific laws logically must also have an author. The chances of this happening by random chance have been computed to be 10 to the 48th power!

Here is another example…let’s say you like to eat alphabet soup, and when you poured it into a bowl a sentence floated on top saying, “Wash this bowl once you’ve finished eating.” What are the chances of that happening by itself? Likewise if a tornado blew into an IBM warehouse of computer parts, what is the possibility that an advanced supercomputer would pop out the other side?

The sheer odds of all “this” happening (earth/life/cosmos) by mere chance is mathematically unfeasible. Likewise these LAWS all had to come from somewhere because all signals must come from an intelligent source be they radio, TV, email…or GRAVITY and DNA. To deny this fact is foolish, and the rest of Psalm 14:1-4 is a sobering admonishment to those that continue to adhere to this claim that “there is no god.”

However if you still don’t believe there is no god, that is your right. We all have free will and can choose to believe or NOT believe anything we want. But considering the two simple laws of:

Given the above, it might take more “faith” to NOT believe in god than to believe in God. So QUESTION: what “LAW” governs your life? The origin of these LAWS or your own laws?