The Difference Between
“Not Guilty” & “Innocent” 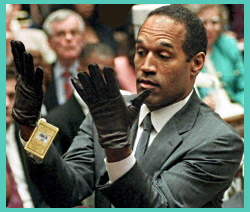 In U.S. courts at the conclusion of a trial, the verdict is either ‘guilty’ or ‘not guilty.’ Note that it is not guilty or innocent, but that does not mean that they are the same! Here’s why.

At the end of the famous O.J. Simpson trial, O.J. was found Not Guilty, but was he Innocent? Personally (and this is not a political comment!) I agreed with the verdict because there were both no eye-witnesses to the crime, and from my perspective from the evidence presented he was (in my thought, right or wrong) not found to be guilty ‘beyond a shadow of doubt.’ Therefore, it is possible to be found “Not Guilty” but not wholly “Innocent.”

At the end of your life, you will stand before the Supreme Judge in the Heavenly Court, and because God is Holy and cannot have any sin in his presence, his eye-witness evidence of every one of your crimes (“secret sins”, Psalm 19:13) will be presented fully and your verdict will be beyond a shadow of doubt - ‘GUILTY!’ But here is the good news…there IS a way to be found INNOCENT!

“ While we were still sinners Christ died for us,
and we have been justified by his blood sacrifice
and saved by that through him.”
Romans 5:8-9
(paraphrased)

This scripture says that because what Christ did on the cross for you, all your sins have been exonerated and paid for. His blood wipes your record clean and you will not just be ‘not guilty,’ but marked as INNOCENT. If you have not accepted this pardon by the Eternal Judge, why would you not want to?? Do not delay – there is no guarantee you will have another chance before the judge puts down his gavel. Ask God to forgive you today and let the saving edict of his merciful judgement pay for the crime of all your sins and declare you INNOCENT.