“Through faith we understand that
the worlds were framed by
the Word of God,
so that things which are SEEN
were not made of
Things that APPEAR.”
Colossians 11:3 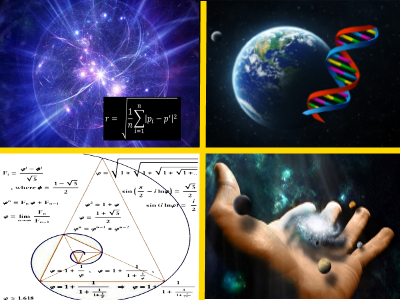 Scientists, through earnest research, have determined that the universes, planets, and stars all happened because of a singular comic event billions; or perhaps trillions of years ago. It has been called “The Big Bang” and credited for everything we can see and observe – including ourselves.

Using the often used analogy of “if you had a room with an infinite number of monkeys at typewriters, just through sheer chance one of them would perfectly compose ‘War and Peace’ word per word” may sound good in theory, but does not hold up in fact for the following reason.

The universe, and the clearly understood elements that have been studied (space, time, matter, energy, gravity, light and so forth) conform to sometimes simple, but often very complex physical and sub-atomic LAWS.

Now think about this for a moment...

The source of any signal has to be intelligent and since laws are written or created by something or somebody, where did these “LAWS” and intelligence to create them come from? The intricate design of our personal DNA has been said to be both mathematically and geometrically amazingly complex. For us to have come out of a primordial chemical soup means we all essentially ´came from a rock´ using the same chance-analogy of an infinite number of monkeys banging out the geological/genetic code in perfect beauty and harmony for the planet.

To take the “Big Bang” (that is, theory, so self-described, not fact) and convert it to an equation, it simply says:

Nothing x Nobody = Everything

Both Genesis 1:1 and John 1:1 says, “In the Beginning, God/The Word (Jesus).” Given that premise, perhaps the following equation makes a lot more sense:

While Hebrews 11:1 says that “Faith is the evidence of things not seen,” Psalm 19:1 says “ The Heaven’s declare the Glory of God.” That’s a BIG BANG that we see every night and day that tells HIS-STORY.