Would You Ignore
The Last Helicopter
Out Of Saigon?

Are you in danger? Most people do not think so, but if you realized you were and there was a means to escape and be saved, you certainly would rush to it.

On April 29th 1975 panicked South Vietnamese citizens burst into the U.S. Consulate in Saigon hoping to escape the impending doom that would shortly arrive when the Viet Cong would overrun the city and win the war..

About 4,000 Years ago another panicked group of people pounded on a door closed on an ark they helped build, but believed it to be an unnecessary and foolish venture. In both cases, imminent danger was present, but when you die if you have no faith in the escape vehicle of Christ as Saviour, you will be doomed just like those left behind South Vietnamese or ancient neighbors of Noah. Learn more by please watching the following short video for the whole story: 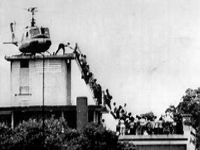